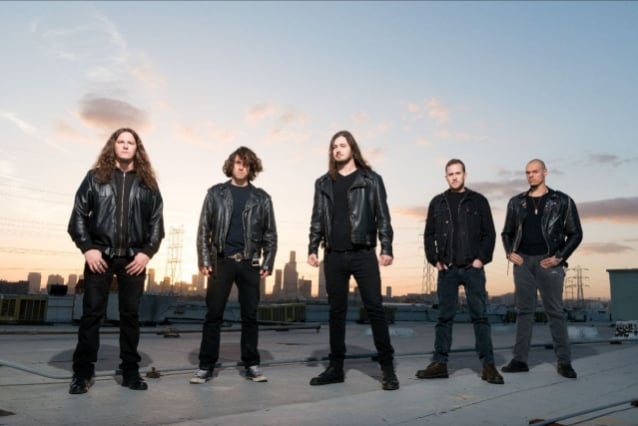 Three weeks into the band's ongoing 54-shows-in-54-days co-headlining tour with ENFORCER, Los Angeles-based thrash quintet WARBRINGER has released a new single, "Firepower Kills". The song can be streamed on Spotify, Apple Music and other digital platforms. A lyric video — created by Hannah Left Wright of Shadowborn Group — can be seen below.

"Firepower Kills" — the digital cover for which was designed by Hugo Juarez of Heavy Defender Studios — serves as the first official taste of WARBRINGER's forthcoming sixth album, due to be released via Napalm Records in February. The group has been playing the track live during their current tour with ENFORCER, which kicked off in San Diego on September 5 and continues tonight at Toronto's Velvet Underground. MetalSucks recently posted fan-filmed footage of the group's performances of the song in both San Francisco and Sacramento, calling it "an aggressive, thrashy number that seems to have done a fine job of keeping the kids a-moshin'... it's reassuring to know the can still crank out thrash riffs with the best of 'em."

WARBRINGER's as-yet-untitled new record — which was helmed by returning producer Mike Plotnikoff (IN FLAMES, FEAR FACTORY, ALL THAT REMAINS) and mastered once again by Howie Weinberg (ANTHRAX, SLAYER, OVERKILL) — will be coming out on Napalm Records and marks the band's first full-length release with bassist Chase Bryant (ONI), who joined the group last year.

"'Firepower Kills' is the album opener and is a rapid-fire thrash burner, with both lyrics and music following the theme of the rapidly evolving and really frightening side of technology. We've been playing this tune nightly on the current tour and it's been highly well-received," explains WARBRINGER vocalist John Kevill. "We are right in the middle of this massive North American tour with ENFORCER and have left a wake of fire over much of the continent. More updates on WARBRINGER incoming… yes, the future looks bright!"

Over the past dozen years, WARBRINGER has released five acclaimed albums of intense, aggressive thrash and toured with a who's who of metal, including MEGADETH, TESTAMENT, OBITUARY, NAPALM DEATH, EXODUS, SUFFOCATION, OVERKILL, ARCH ENEMY, KREATOR, SOILWORK, MUNICIPAL WASTE, SKELETONWITCH, DESTRUCTION, NEVERMORE, SYMPHONY X, ICED EARTH and DEATH ANGEL, among others.