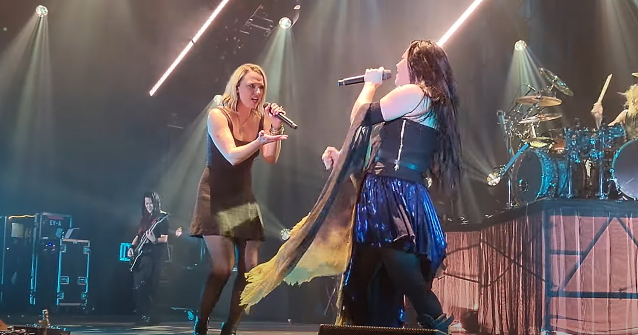 Fan-filmed video of HALESTORM's Lzzy Hale joining EVANESCENCE on stage during the latter band's November 21 concert at 713 Music Hall in Houston, Texas to perform a cover version of LINKIN PARK's "Heavy" can be seen below. The show was part of the EVANESCENCE and HALESTORM's U.S. co-headlining tour, which kicked off on November 5 at the Veterans Memorial Colosseum in Portland, Oregon and will run through December 18 in Worcester, Massachusetts.

Lzzy and EVANESCENCE singer Amy Lee have been performing "Heavy" at every stop on the current tour. Lzzy spoke about the decision to cover the track in an interview with the 105.7 The Point radio station. She said: "[Amy and I] were lobbing a couple of ideas back and forth and then, all of a sudden, we landed on LINKIN PARK. And [we thought], you know what? That would be really cool because inadvertently it would be a tribute to [late LINKIN PARK singer] Chester [Bennington], but also, everything that this song has been about, we've all been through that — everybody. And so it's almost this like very church moment where you walk out onstage and you're, like, 'All right. This is my church. These are my people. We're all doing this together.'"

Hale also talked about her musical chemistry with Lee, saying: "There's something otherworldly that happens when I sing with her live onstage. And it's something that I can't necessarily put my finger on, that feeling. I've done thousands of other collaborations in my life, and this is very, very special. She is, obviously, a phenomenal singer; that's not even cutting it — phenomenal. But there's something that happens when we sing together because of the different personalities; it's almost like this dance that happens. Amy has likened it to a well-matched tennis match where we both have that trust because we both know that no matter what, both of us bring it; we're always on a hundred and ten. And so to be able to feel that again with her after so many years of not touring together and doing this… I don't know — I think I leave my body. When I'm onstage when that happens, all of a sudden the song's over and I'm, like, 'Wait. Did I just blank out? What happened?'"

EVANESCENCE and HALESTORM first toured together in 2012. Lee later guested on the track "Break In" on HALESTORM's 2020 "Reimagined" EP and Hale lent backing vocals to the EVANESCENCE song "Use My Voice" and appeared in the accompanying music video.

EVANESCENCE is on tour supporting this year's "The Bitter Truth" album. HALESTORM is promoting its latest single, "Back From The Dead", which recently became the band's sixth No. 1 at rock radio. 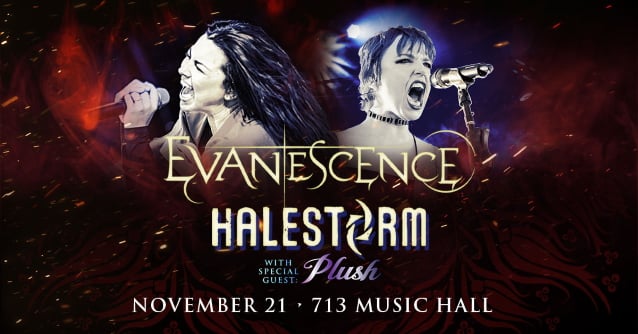