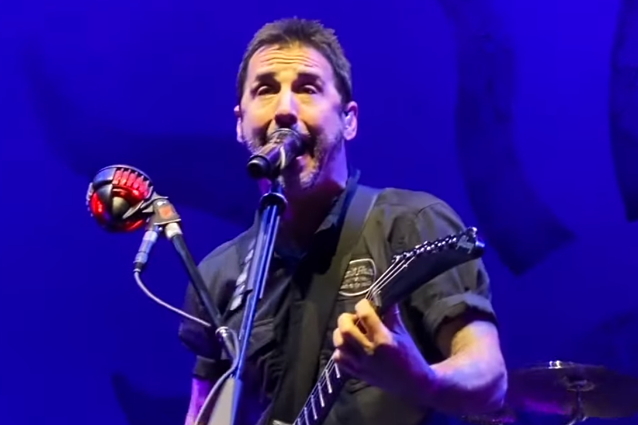 GODSMACK frontman Sully Erna made an appearance at this past Wednesday's (January 29) weekly "Soundcheck Live" event at Lucky Strike Live in Los Angeles, California. Erna joined event curator Nuno Bettencourt (EXTREME), along with Glen Sobel (drums), Derek Frank (bass) and Steve Fekete (guitar), on covers of ALICE IN CHAINS' "Man In The Box" and THE DOOBIE BROTHERS' "Long Train Running". Video footage of the performance can be seen below.

GODSMACK has often been compared with ALICE IN CHAINS, and some critics have even charged that GODSMACK got its name from the ALICE IN CHAINS song "God Smack" on that group's 1992 album "Dirt".

Erna admitted in a 1999 interview with Billboard magazine that ALICE IN CHAINS had been "a big influence" on his band. "I'd be lying if I said they weren't," he said. "There isn't any band that hasn't been influenced by someone."

As for the origin of GODSMACK's name, Erna explained: "We knew that 'God Smack' was the name of an ALICE IN CHAINS song, but we didn't name our band after that song. What happened was we were rehearsing one day and our drummer came in with this huge cold sore on his lip. I teased him and really gave him a hard time about it. But then the next day, by this weird coincidence, I happened to get a cold sore on my lip. And so one of the guys in the band said to me, 'See, God just smacked you on the head for all that [teasing].' We took it as a sign, so that's why we named the band GODSMACK."

Back in 2003, Erna said that his band is more original-sounding than they were being given credit for. When asked by Launch how he felt about the way the group was perceived by critics, Erna said: "I think the only misconception is that we were pegged as an ALICE IN CHAINS clone band at one time, which I don't get. I don't think we sound anything like them. I mean there's definitely influences there, but there's influence from [LED] ZEPPELIN and [BLACK] SABBATH and PANTERA, and everybody else. It's just that we're all molded from everybody from our past. These are some of the bands that we grew up listening to, or enjoy today, and sometimes it triggers an idea. So, there could be hints of influences there, but that kind of got on my nerves for a while. But with a name like GODSMACK, how could people not go there?"