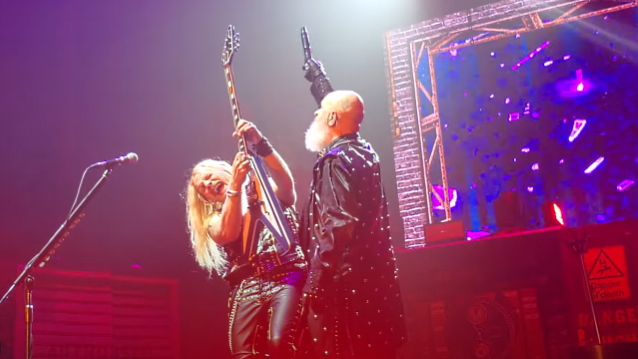 Fan-filmed video footage of JUDAS PRIEST's September 16 performance at Van Andel Arena in Grand Rapids, Michigan can be seen below.

The British heavy metal legends, who are celebrating their 50th anniversary, threw in several rarely played songs in their set, including "One Shot At Glory" and "Invader", as well as several tracks that hadn't been played in a long time, such as "Rocka Rolla", "Hell Patrol", "A Touch Of Evil" and "Blood Red Skies".

JUDAS PRIEST guitarist Richie Faulkner told Lana Morgan of the 102.9 The Hog radio station about the "50 Heavy Metal Years" setlist: "It's always a challenge, going into a new tour, to put a setlist together. They've got, like, a million songs. You're always gonna miss out on someone's favorite. But you've gotta put something together that's dynamic, it flows, it has good peaks and troughs and tension and drama — and you put a setlist together like that — and you've also gotta hit on the old songs and new songs, all that sort of stuff. So we've put together what we think is the most dynamic and exciting and dramatic set. And it seems to be going down really well. And as we move on into the tour, if we come back to the States or we do different markets around the world, we're not opposed to putting new songs in there — different songs, I should say. We could re-evaluate the setlist a bit and make it a bit more exciting, change it up.

"The reaction we're getting to the setlist at the moment has been really positive, and it's got some really surprising tracks in there — some that the band hasn't played in a long time and some that the band has never played live at all up until this point," he continued. "So, as a fan myself, it's great to be out there playing these songs and experiencing the band playing these songs for the first time in some cases."

On October 15, JUDAS PRIEST will release "50 Heavy Metal Years Of Music", a mammoth limited-edition box set which will include every official live and studio album to date plus 13 unreleased discs. This is the most extensive release of previously unreleased music the band has made from its vast archives — a real treat for fans. Restored and mixed by Tom Allom at La Cucina W8 and mastered by Alex Wharton at Abbey Road Studios, this special release will be made available via Sony Music.