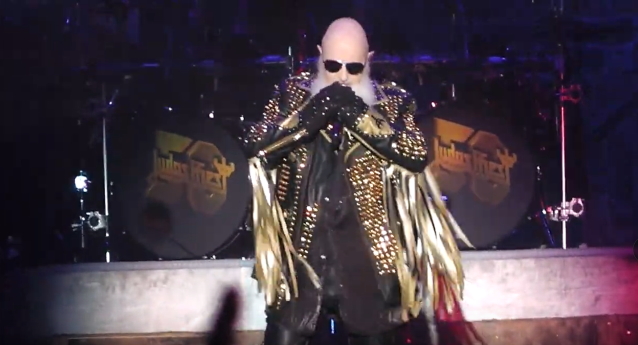 PRIEST singer Rob Halford recently told Metal Pilgrim that Glenn is "still actively involved with JUDAS PRIEST, a hundred percent. Andy is still standing in that spot for Glenn with Glenn's blessing… And my gratitude to Andy. It couldn't have happened in a better way, if you wanna try and make something good out of it. It was a really important day when Glenn said, 'I think it's probably best if I step to the side and maybe we should let Andy come in.' That was just a really beautiful act of selflessness. That's Glenn treasuring PRIEST and PRIEST's reputation, particularly in live concert more than anything else. So bless Glenn for that. And as a result, Andy stepped in and did amazing work on the 'Firepower' tour, and we're looking forward to doing the same thing with him on this 50th-anniversary [tour]. And don't discount the fact that Glenn can show up. He plays the guitar differently, but there's no reason why Glenn can't show up and do some work. I mean, I've said to Glenn, 'Just walk out on stage and do that to everybody [flashes devil horns], and the people will just go fucking crazy, 'cause you are loved so much.' But I've got a feeling that Glenn's gonna be making the occasional appearance on this 50th-anniversary [tour]."

This past June, JUDAS PRIEST announced the rescheduled dates for the North American leg of its 50th-anniversary tour. Produced by Live Nation, the "50 Heavy Metal Years" trek will feature SABATON as openers. It will kick off on September 8 in Reading, Pennsylvania and run through October before concluding on November 5 in Hamilton, Ontario.