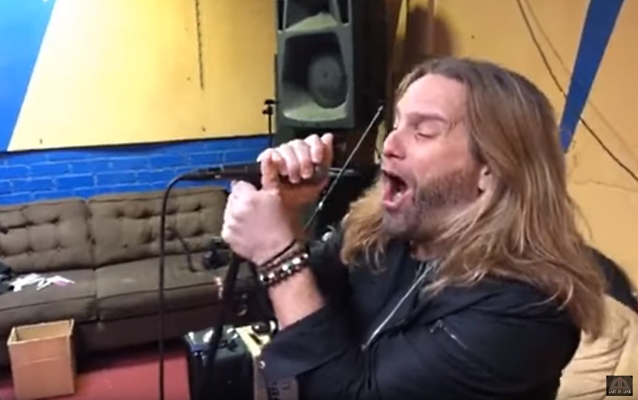 Video footage of LAST IN LINE rehearsing for its upcoming tour can be seen below. The trek is scheduled to kick off tonight (Thursday, January 17) in San Jose, California.

LAST IN LINE's sophomore album, "II", will be released on February 22 via Frontiers Music Srl. As with 2016's "Heavy Crown", the new disc was produced by DOKKEN and FOREIGNER bassist Jeff Pilson.

LAST IN LINE was formed in 2012, when Vinny Appice, Jimmy Bain and Vivian Campbell — Ronnie James Dio's co-conspirators and co-writers on the "Holy Diver", "Last In Line" and "Sacred Heart" albums — teamed up with esteemed vocalist Andrew Freeman. The debut album "Heavy Crown" was released in February 2016, landing at No. 1 on Billboard's Heatseekers chart. Initially, the release had been preceded by tragedy when bassist Jimmy Bain unexpectedly passed away at the age of 68 on January 23, 2016. LAST IN LINE, honoring what they knew would be Bain's wish to keep the band moving, brought in renowned bassist Phil Soussan (ex-OZZY OSBOURNE) and committed to sustained touring in support of the album, hitting festivals, headlining clubs, and sharing the stage with metal luminaries such as SAXON and MEGADETH.

"The musical style of 'II' is different from 'Heavy Crown', but it wasn't something that we planned to do," explains Campbell. "Phil is a more intricate player than Jimmy was and that, together with the natural growth and development of the band led us to the songs on the album. As always, we simply started to jam on ideas and see where they led us. But it's fair to say that the songs on this album sound more developed, with more parts and more experimentation than the songs on 'Heavy Crown'. The first album set a tone, but on 'II' we developed that idea and took it to the next logical stage."

Appice, on the sound of the new record and songwriting process, says: "I always sound like me. Viv and I have been playing together for years and have the same feel and pulse and attitude. Now with Phil on bass, he allows a more melodic approach on the bass parts making the songs even more interesting. He fits in perfectly being from the same musical family and time as me and Viv. Mr. Freeman sings from his soul and completes the band's sound with his melodies and amazing range."

He continues: "The songwriting process was the same as DIO's 'Holy Diver'. First, we have fun writing together. We get in a room and jam on riffs and chords until we hit on something good, then continue to build it into a song. Andy puts his magic on it and it all works out very well."