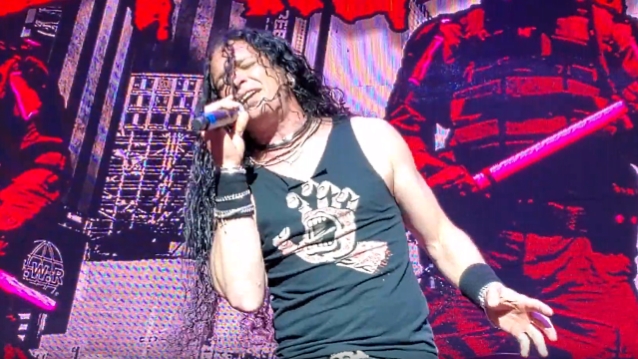 Fan-filmed video footage of SKID ROW's May 5 performance at the M3 Rock Festival in Columbia, Maryland can be seen below.

SKID ROW recently inked a worldwide deal with Australia's Golden Robot Records. The the final chapter of the band's "United World Rebellion" trilogy will be released later this year. The disc was recorded at a Nashville, Tennessee studio with producer Michael Wagener, who also helmed the group's 1989 self-titled debut and 1991's "Slave To The Grind".

The album will mark SKID ROW's first release with South African-born, British-based vocalist ZP Theart (DRAGONFORCE, TANK, I AM I), who joined the band in 2016 following the departure of Tony Harnell (TNT, STARBREAKER).

SKID ROW's new album will feature collaborations with several outside songwriters, including Corey Taylor (SLIPKNOT, STONE SOUR) and Lzzy Hale and Joe Hottinger of HALESTORM, a group that covered the title track of "Slave To The Grind" on its "ReAniMate: The CoVeRs eP" in 2011. SKID ROW also worked with songwriter-for-hire Marti Frederiksen, who has previously collaborated with AEROSMITH, DEF LEPPARD, Jonny Lang and Sheryl Crow.

SKID ROW will perform at a number of high-profile European festivals in 2019, including Germany's Bang Your Head!!!, the U.K.'s Download, Sweden Rock Festival and Norway Rock '19.