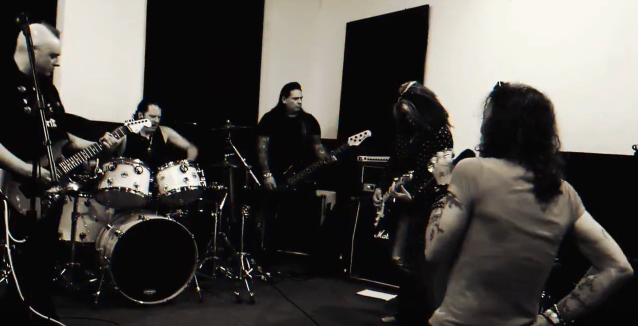 RATT frontman Stephen Pearcy has uploaded a video clip and several photos of him rehearsing with his solo band for what will apparently be a yet-to-be-announced livestream concert. According to postings on Pearcy's social media, "RATT was initially set to do the concert, but [was] eventually not able to commit to the show." The livestream event will now be played by Pearcy and his solo band consisting of guitarists Erik Ferentinos and Frankie Wilsey, bassist Jerry Montano and L.A. GUNS drummer Scot Coogan.

Earlier in the month, Pearcy released a music video for his cover version of DURAN DURAN's 1981 single "Girls On Film". The song came four months after the arrival of his previous solo single, "Night Flight". That track, a collaboration between Pearcy and his longtime guitarist Ferentinos, is expected to appear on Stephen's upcoming sixth solo album, which is tentatively due later this year. The follow-up to 2018's "View To A Thrill" will reportedly feature 13 tracks.

Last July, Ferentinos, who has played with Pearcy for nearly two decades, told All Music/All Bands about the musical direction of Stephen's next album: "The new record will have the '80s rock sound that fans have come to expect from us with a few surprises thrown in for good measure. There are some heavy bangers on there that the RATT fans will love. I try to keep it edgy, but I want us to have a hit. I'm always trying to top what we've done so far, with catchier riffs and melodies to get more fans interested in our music."

Pearcy's fifth solo LP, "View To A Thrill", came out in November 2018 via Frontiers Music Srl. The follow-up to 2017's "Smash" was produced by Matt Thorne and Pearcy and was mixed and mastered by Thorne and Ferentinos.

Pearcy and bassist Juan Croucier are the sole remaining original members in RATT's current lineup, which made its live debut in July 2018 in Mulvane, Kansas. Joining them in the band are drummer Pete Holmes (BLACK 'N BLUE, RATT'S JUAN CROUCIER) and guitarist Jordan Ziff (RAZER).

Last month, Pearcy told SiriusXM's "Trunk Nation With Eddie Trunk" that he was open to the idea of making a new RATT album with all the surviving members of the band's classic lineup.

“Backstage Past”, Today rehearsals, and a bit of filming through next week for a planned Docu series on the RATT founder...