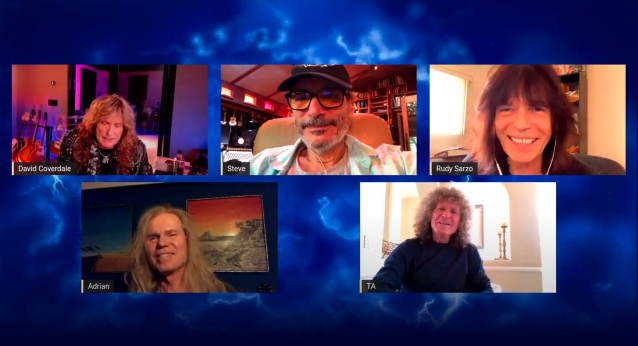 On August 18, singer David Coverdale, guitarists Steve Vai and Adrian Vandenberg, bassist Rudy Sarzo and drummer Tommy Aldridge reunited — virtually — for the first time since they finished WHITESNAKE's "Slip Of The Tongue" world tour for a question-and-answer session prior to a live stream of the band's legendary "Live At Donington" concert. You can now watch the discussion below.

WHITESNAKE scored the band's third consecutive platinum record with its eighth studio album, "Slip Of The Tongue". Originally released in November 1989, it peaked at No. 10 on the U.K. and U.S. album charts thanks largely to its two Top 40 hits — "Fool For Your Loving" and "The Deeper The Love". The fan favorite turned 30 last year and Rhino celebrated with several new versions, including a colossal seven-disc boxed set.

Following the eight-times-platinum success of its eponymous album in 1987, WHITESNAKE returned two years later with "Slip Of The Tongue". At the time, the band included Coverdale, Sarzo, Aldridge, Vandenberg and Vai. Vandenberg and Coverdale co-wrote all but one song on the album, but Vandenberg couldn't record them in the studio at the time due to a hand injury. To fill the void, Vai joined the band for the album and tour.

"When I had joined WHITESNAKE, the tracks were already recorded and Adrian had laid down guide rhythm tracks," Vai told Guitar World. "What had happened was Adrian developed this situation with his wrist that persisted throughout the tour. I'm not sure what caused it, but he'd have to soak his wrist after every show.

"Adrian's such a great player, but the injury made it so he couldn't really sustain for too long because of the pain. I've stayed pretty close with Adrian over the years and I see him whenever I'm in Holland, and when I spoke to him a couple of years ago, he was still having that wrist problem — but they located the source of it to his neck.

"So Adrian had made these guide tracks and that were basically chords and structures, and I obviously copped a lot of the riffs from those, but I put my spin on them because it was all like one track of guitar. I went in with 20 tracks on some songs; it's a very dense guitar record and I definitely did my best to decorate it. It was a departure for what WHITESNAKE was normally known for in the guitar department."

Asked if he had any reservations about not staying wholly true to WHITESNAKE's old signature sound, Vai said: "You have to find a balance between what's expected of you from the band, what the fans are expecting, what the song requires and is telling you to do — and also being true to your own voice. I had no choice but to express my own voice because that's all I know.

"If I had tried to sound like Yngwie [Malmsteen] when I had joined ALCATRAZZ, it just wouldn't have worked because I'm very satisfied with the way I play, but I also can't play like Yngwie. It was the same thing when I was playing with Dave [David Lee] Roth; I needed to deliver in a rock context — which was very natural to me — but I'm not going to compete with Edward Van Halen.

"There's no way those records would've been accepted if I didn't have some kind of rock integrity, but I knew what the songs needed and I knew what the audience was expecting and there's a side of me that I knew could deliver that. It was the same thing with WHITESNAKE.

"The foundation of WHITESNAKE's sound was rooted in rock blues, and there's a whole culture that emanated from Europe in that traditional solid rock blues guitar playing that had a real authenticity to it.

"Michael Schenker, Uli Jon Roth, Adrian Vandenberg, Ritchie Blackmore, Jimmy Page — that was the sound all WHITESNAKE records had been built upon. But WHITESNAKE had gone through different permutations of guitar sounds throughout the years, and the previous one to me was John Sykes, and he absolutely had his own sound.

"You cheat yourself when you try to do that and play like someone else. And the audience is a lot smarter than you think; they're very intuitive and perceptive and if you try to pull anything over on them — like biting someone else's thing — you'll get beat up for it."