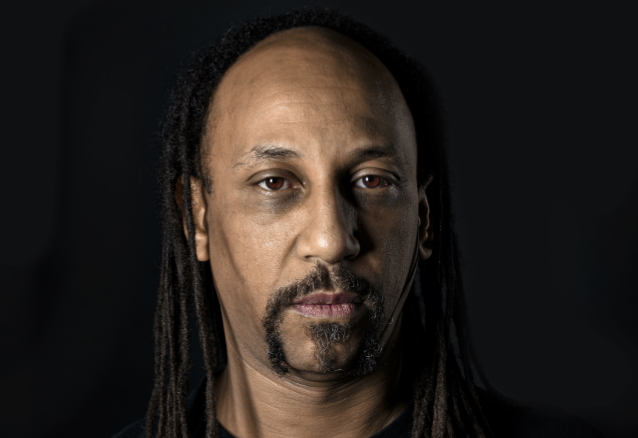 "I think for us [in SUFFOCATION], the time and place, it was just an oddball thing. Me, I happened to just pick up a guitar when I was, like, 10 or 11 years old, and by 13, everything I wanted to do was just play guitar. So I locked myself in a room and was just listening to things that had guitar; it wasn't dance music. And it was heavy. And then when we were in high school — me and Frank [Mullen, vocals] and Mike Smith [drums] and Doug Cerrito [guitar] — we would play the 'Battle Of The Bands', and we all wanted to play heavy music. For us, it was just that's what we wanted to do; it didn't matter about color or anything. For [SUFFOCATION's first record label] Roadrunner, back at the time, Nuclear Blast, Relapse, I was happy that they paid attention to us even though it was that way. Because we never knew if it was gonna be… Are we gonna get signed, and are they gonna look at us like we're fucking shot? … You just never knew how anybody was gonna take it. And we were very fortunate to not really have any of those problems."

In a 2020 interview with Loudwire, SEPULTURA frontman Derrick Green, who is black, said the subject of racism in the music industry can be hard to understand if it's not something that affects you directly. "Unless you really experience it, then it's hard for you to really imagine it's happening," he said. "But it's consistently happening. It exists all around the world." BAD WOLVES guitarist Doc Coyle concurred, saying: "Go to a GOD FORBID music video on YouTube and look at the comments and ask yourself if there's racism in metal. There's this idea that if I haven't experienced it, then it must not exist. It kind of speaks to this idea of the limitations of empathy. You can try to see the world through someone else's eyes, but you just can't. And the truth is if someone feels like that's their experience, even if I haven't experienced it, I have to give them the latitude to express their experience. By saying it doesn't exist — that's the definition of gaslighting."

As previously reported, SUFFOCATION will release a live album, "Live In North America", on November 12 via Nuclear Blast Records.

SUFFOCATION created the template for the brutal death metal genre in the early 1990s. Landmark albums such as "Effigy Of The Forgotten" and "Pierced From Within" also went on to inspire the birth of the tech-death and slam death metal genres.