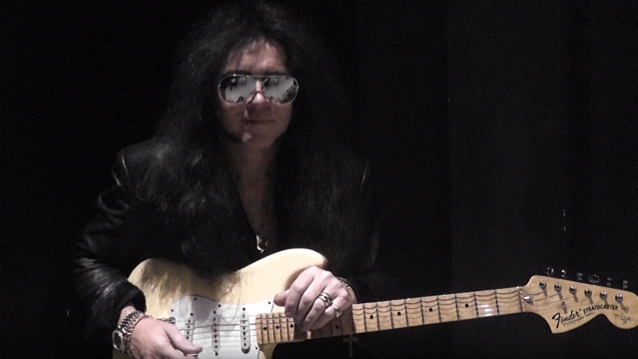 Andy Rawll of MetalTalk conducted an interview with legendary Swedish guitarist Yngwie J. Malmsteen about his forthcoming blues album, "Blue Lightning". You can watch the entire chat below. A few excerpts follow (transcribed by BLABBERMOUTH.NET).

On the inspiration behind "Blue Lightning":

Yngwie: "It's a funny thing. I've been told by people since as long as I can remember, 'You're just noodling around onstage.' They would go, 'You should do a blues album.' I always said, 'Nah. I don't think so.' But, about a year ago, Mascot came to me and said, 'Hey, blues album.' I said 'Maybe bluesy.' That's what we did. We picked some classic songs and we originally said we're going to pick them together, but I picked them, and they liked it. That's how we did it. I was basically touring the 'World On Fire' album, then going into the studio for a bit, then going out on tour, so it wasn't one shot in the studio. I quite enjoyed it, actually. I had a lot of fun doing this."

On his vocal performance on "Blue Lightning":

Yngwie: "I'm quite pleased with it, yeah. It was a funny thing: My studio, like I told you, I have this new [equipment] brought in, every time we started doing new stuff in the studio, it's like an inspiration to go in and do something. I had this brand-new vocal microphone they gave me from a company called Neve. It's a really amazing vocal mic. So, a lot of times it was inspiring to hear all the sounds coming out of the microphones. It was a lot of fun. That's what it was, yeah."

On what other guitar players have inspired him:

Yngwie: "Very early on in my life and career, my musical life, so to speak, I actually leaned away from the guitar players and was very much into classical violin. That's in 99.9999 percent of my influences, especially [Niccolò] Paganini, but I hear guitar players, I've heard guitar players since then, of course, that I admired greatly, like Alan Holdsworth — many other things. I like guitar players you probably wouldn't think, like Angus Young and Brian May. They're all great. I think there's a lot of great guitar players out there. As far as influence? No."

Yngwie: "It was a lot of fun. We actually played 'Speed King'. We played 'Demon's Eye', I think. We played 'Black Night', 'Lucille' and one more, but I actually had an even more interesting — I did a tour with DEEP PURPLE in 2009. It was with Don Airey and Steve Morse and the last show was in Tokyo. They said, 'Hey, come up and play with us.' That particular night, Jon Lord happened to be in town. Jon Lord came up and I came up and we did 'Smoke On The Water'. It was crazy. That was really good. That was a lot of fun."

On the 1978 "Powerhouse" demo that helped launch his career:

Yngwie: "To be honest with you, I didn't know what to expect about anything. That was a few years before I moved out, so I did everything I could in Sweden. It wasn't going very well. [Laughs] I made a lot of tapes and I would send them out all the time. I sent them to Guitar Player magazine and they said, 'You got to come to the States.' That was in '82."