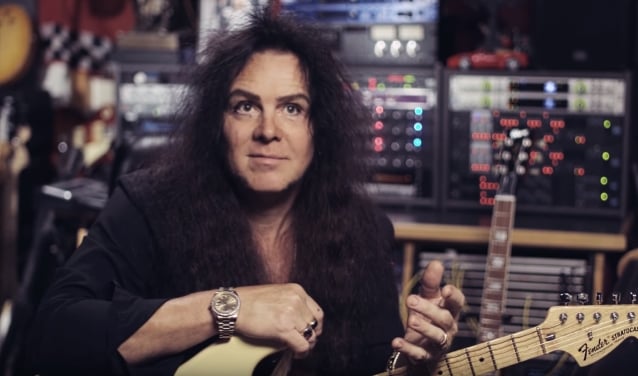 Legendary guitarist Yngwie Malmsteen, who has often been criticized for his his blistering arpeggios, exotic scale runs and infatuation with harmonic minor, says that he doesn't pay attention to his detractors. "I think maybe people are very short-sighted, and that's just the way people are," he tells Eonmusic in a new interview. "I learned to live with that a long time ago. You've got to understand that before — I mean, 37 years ago — I came to the States, I was struggling in all sorts of ways, because I wasn't trying to be commercial sounding or anything like that. The vein of music that I did was extremely heavy, extremely fast, extremely complicated. If you heard some of the demos that I did in '79 or '80, it was basically pretty fucking extreme, and so a lot of people go, like, 'This guy'll fuckin' never make it.' They were always laughing. I've heard shit like that all my life, it seems."

Malmsteen credits his perseverance for helping him reach his goals and his dreams.

"I have something inside of me that told me this is what I'm meant to do and I gotta stick with this," he says. "I was tempted, as I was asked to join a couple of bands that had a record contract, and I almost went with a couple of generic fuckin' cookie-cutter fuckin' metal bands, and I said, 'No, I'm not doing it.' Then I eventually ended up joining a cookie-cutter band, STEELER, anyway, so there you go. [Laughs]

"I've always been very, very focused in one way: 'This is what I'm gonna do, and no one is gonna tell me any different,'" he continues. "So, I think that's one of the reasons maybe why I'm still doing this… I'm doing it because I really believe in what I'm doing; I do. It feels like it's the right thing, this is my natural way of doing things. I mean, if you told me to do this, this and this, I could do that. If you told me you should do it like that, or why don't you tune it down, or why don't you do something more fashionable, I could very easily do that. It wouldn't be a problem for me to do that. But I wouldn't do it, because it's not my thing. That goes in every aspect — how I do the shows, how I do my lighting and my smoke, and the fuckin' pyro or whatever, and my Marshall walls — everything is done because that's what I want to do."

Yngwie will release a new album, "Blue Lightning", on March 29 via Mascot Label Group. On the disc, Yngwie pays homage to those from the blues world who have fueled his artistic spirit for so long. "Blue Lightning" also includes four original tunes that bring to the fore Malmsteen's love for the blues. "I have always featured songs with a blues groove on albums," he said in a press release. "So, having my own material in this vein was very natural for me."