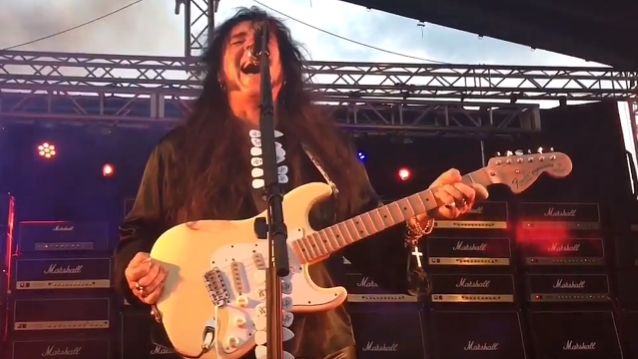 During a recent press conference in Malaysia, legendary Swedish guitarist Yngwie Malmsteen was asked why he chose to handle lead vocals himself on his latest album, 2016's "World On Fire". He said (see video below): "When I started out when I was a kid in Sweden, I had a band called RISING FORCE, I was the singer. Then I came to America and I was playing with STEELER and ALCATRAZZ, they [had their own] singers.

"I always thought that singers have the Elvis Presley syndrome — they think they're Elvis Presley," he continued. "They're not Elvis Presley. Because I write the music, I write the lyrics, I write the vocal melody lines — I write everything. Just because I let somebody sing something doesn't mean they're more important than the bass player or the keyboard player or the drummer. Because I write all the parts — I write the drum parts, the bass parts, the keyboard parts, the guitar parts and the vocal parts — like a classical composer. And I really kind of got tired of dealing with their bullshit, really. So I decided to sing myself."

Yngwie also talked about his approach to performing live. He said: "I was just playing in Europe a couple of nights ago — I did three nights in a row. And three nights in a row I played the same songs, but I didn't play 'em the same way. I never play the same thing. I go on stage and I challenge myself and I make it dangerous. [And by] 'dangerous' [I mean] I take risks — music risks. And if I would just have something rehearsed and I would just play what I rehearsed, I would never do it — I would have stopped a long time ago. But I go on stage and I improvise everything. Tomorrow night, I'm gonna play things I've never played before — it'll be the first time I'll ever play it. I will challenge myself every moment of the show, and that's what makes it interesting and that's what makes it exciting."

Yngwie went on to say that he developed his playing style "very, very early on" when he was "very, very young." He explained: "From a very early point, I knew where I was going. I didn't search; I didn't go, 'Oh, man, I should try this or I should try that.' [I followed a] very straight line, and I knew exactly where I was going. Not because somebody said, 'Oh, you should do this,' or, 'That's on the radio. You should play that.' Because I had a musical vision that I didn't compromise on. And that came from basically absorbing classical and baroque music — Niccolò Paganini, Tchaikovsky, Vivaldi, Bach and so on. And it's in my DNA — it's how I think. When I play guitar, it's automatic. I don't try to do something; I just do it. And it's already so ingrained in what I do, I don't think about it. I don't try to do something — I just do it. And the more I do it that way, the more I surprise myself. And if I surprise myself, that's the best thing. So I don't analyze it, and I don't [go], 'Oh, yeah, today, because I play in Malaysia, I'm gonna play it like this.' No. No, no. Every day is a different thing."

Jeff Scott Soto, who sang on Yngwie's first two albums, 1984's "Rising Force" and 1985's "Marching Out", last year engaged in a war of words with the Swedish guitarist over the fact that Malmsteen claimed in an interview that he "always wrote everything," including the lyrics and melodies, and simply hired various vocalists to sing his material.

In the days after Yngwie's original interview with Metal Wani was published on BLABBERMOUTH.NET, several of the guitarist's former singers — including Soto, Joe Lynn Turner and Tim "Ripper" Owens — responded on social media, with Turner describing Malmsteen's statements as "the rantings of a megalomaniac desperately trying to justify his own insecurity." This was followed by a retort from a member of Yngwie's management team, who wrote on Malmsteen's Facebook page that the three vocalists "came out enraged, spitting insults and profanities" at the guitarist because "Yngwie said something that they didn't like." The management representative added: "It's very unfortunate that these past hired vocalists must resort to mudslinging and insults to elicit any kind of media attention towards them. Such classless, puerile words are ungentlemanly at best and absolutely disgraceful at worst."